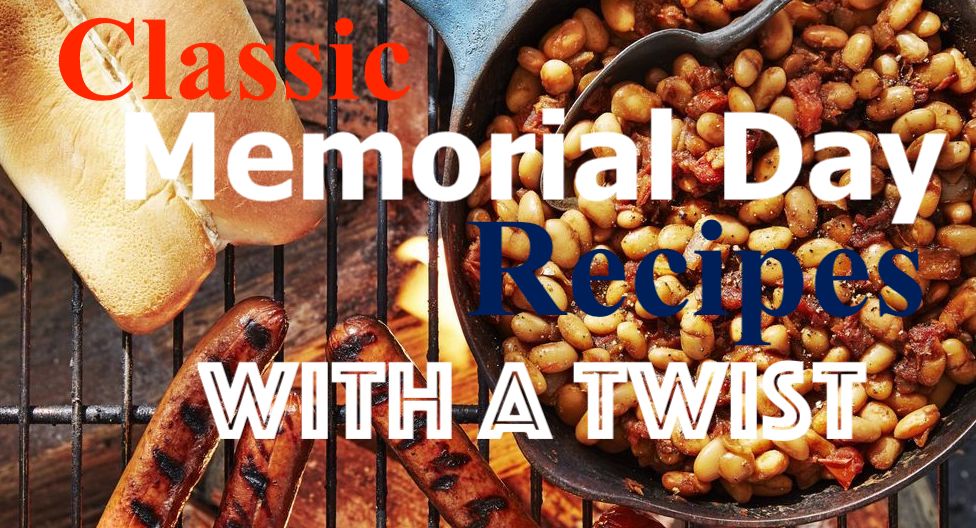 Memorial Day gives us pause to remember those in the military who serve our country both past and present. This commemoration began soon after the Civil War, and became a national holiday in 1971. We celebrate the day gathering with family and friends for a picnic. Usually quintessential American food is served — burgers on the grill, apple pie — and a whole lot more.

This year with COVID-19, we’ll be celebrating in spirit, instead of together with our loved ones. No doubt, Zoom picnics will ensue. Should you be called upon to make a covered dish for a virtual barbecue, wow viewers by taking conventional dishes up a notch.

Here are classic Memorial Day recipes with a twist !

Beans and franks are at many Memorial Day picnics. But, instead of beans from a can, this year try an easy to cook version.

Ketchup, mustard, and relish for serving

Set up grill for direct and indirect heat. Once grates are hot, lightly grease with canola oil.

Grill hot dogs over direct heat turning occasionally, until warmed through, 5 to 6 minutes. Lastly, Grill buns, if desired. Serve hot dogs in buns with beans, ketchup, mustard, and relish alongside.

In place of usual mayonnaise, treat your taste buds to a vinaigrette this year. Bacon and potatoes…how can that not be a delicious memorial day dish?

Heat grill to medium-high. Line a plate with paper towels.

Cut potatoes in half. Place potatoes in a large saucepan and cover with cold, salted water by 2-inches. Cover and bring to a boil, reduce heat and simmer until easily pierced with a knife, 14 to 16 minutes. Drain and let cool. Transfer to a bowl and toss with 2 Tbl. of olive oil. Set aside.

Cook bacon in a large skillet over medium heat, flipping occasionally until crisp, 5 to 7 minutes. Remove to plate with paper towels.

Discard all but 1 Tbl. of the bacon drippings from skillet. Off the heat, add garlic, vinegar and brown sugar to the drippings in the skillet, scraping up any brown bits. Whisk in remaining 4 Tbl. of olive oil. Season with salt and pepper. Afterwards, transfer to a bowl. This red one is pretty for the Memorial Day holiday!

Grill potatoes cut side down until lightly charred, 2 to 3 minutes. Grill scallions, turning occasionally until charred, 4 to 6 minutes. Cut scallions into 1-inch pieces.

Add potatoes, scallions, and marjoram to bowl with dressing, and toss to coat. Let stand for 5 minutes. Sprinkle with bacon, and toss again. Season with salt and pepper. Garnish with marjoram. Serve immediately.

As a child, Green Goddess dressing was très fancy. I was always impressed when it was served at a restaurant. Green Goddess became popular in the United States around 1950. It originated in France earlier as sauce au vert. There have been numerous iterations through the years, and each one is delicieuse!

Puree avocado, parsley, tarragon, lemon zest and juice, oil, garlic, anchovies, and 1/4 cup of the chives in a blender. Season with salt & pepper. Thin with additional lemon juice or water if needed.

Cut remaining chives into 1/2 pieces. Toss together lettuce and half the dressing, arrange on a beautiful platter. Top with cucumbers, tomatoes, and remaining chives. Drizzle with remaining dressing. Last, season with pepper.

Throughout the Southern United States, black-eyed peas have been popular for years. They are a variety of cowpea, and actually a bean.

As people from the south relocated to different parts of America, they took their culinary traditions with them. As a result, the black-eyed pea has become loved nationwide. This recipe shows why.

Bring black-eyed peas and chicken stock to a boil in a medium saucepan over medium-high heat. Cover, reduce heat to low, and cook until tender, 5 to 7 minutes. Drain and cool for 30 minutes.

Stir together black-eyed peas, peppers, tomatoes, scallions, oil, and vinegar in a bowl similar to this. Season with salt and pepper. Importantly, chill until ready to serve, at least 4 hours and up to 24 hours. Fold in spinach.

Few foods are as American as Cracker Jack. The salty, sweet snack lives up to it’s slogan “the more you eat the more you want.” It’s history spans back to 1896 when local merchants sold sugar-coated popcorn with peanuts. With so many ways to incorporate the icon into desserts, Cracker Jack’s staying power will remain.

Melt butter in a large Dutch oven over medium heat. Cook, stirring frequently, until browned and fragrant, 4 to 6 minutes.

Remove from heat and stir in marshmallows, until melted. Fold in Cracker Jack, pretzels, peanuts, and salt until all is coated. Transfer mixture to the buttered baking pan and press into an even layer. Cool completely. Cut into squares.