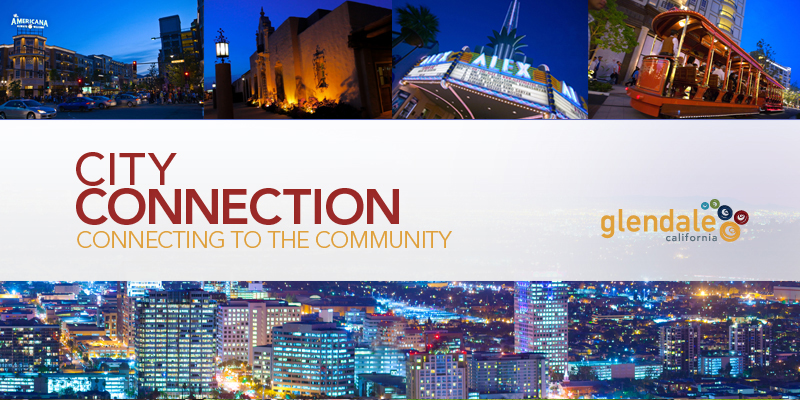 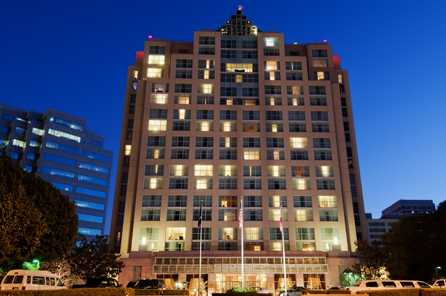 As someone who travels a lot, I sometimes think an upcoming destination may not have as much to offer as I’d like. But, usually I’m pleasantly surprised. Glendale, California was one of those refreshingly wonderful surprises. It’s a suburb eight miles north of downtown Los Angeles, ranked the third largest city in the sprawling SoCal county. The Hilton Glendale   http://bit.ly/2qJsRgA , where I stayed, is on the corner of the most happening street in the area… Brand Blvd. No need to go far from the hotel to get your fun on! 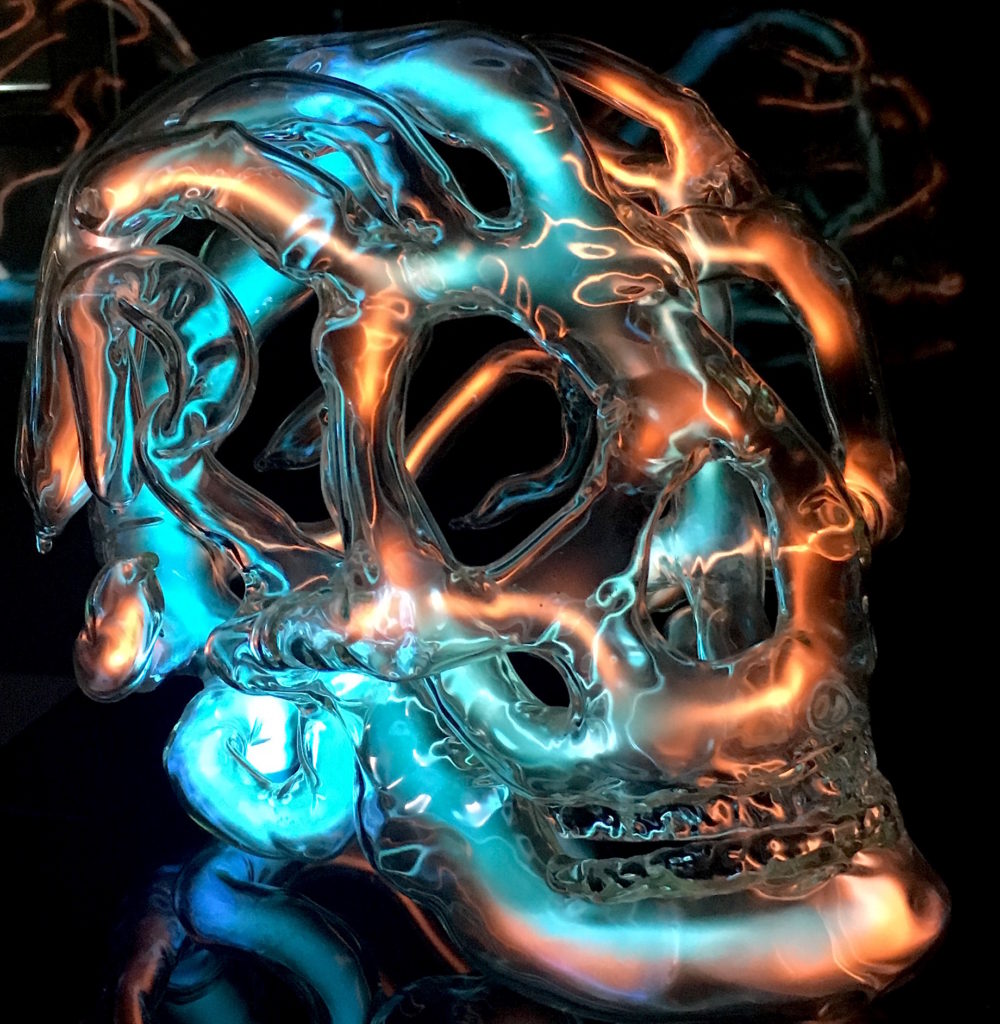 Museum of Neon Art: (1.5 miles) The smiling faces of automotive icons Manny, Moe and Jack on a ’70s-era Pep Boys neon sign fill the wall behind the museum’s front desk. This is one of the many classic pieces of advertising rescued by Executive Director, Kim Koga. While the Glendale museum’s goal is to preserve pieces dating as far back as the early 1900’s, they also showcase modern day neon with art exhibits that take glass lighted tubes to a new level.

In a dark gallery, The Art of Plasma show fills the space — and your mind — with what happens when psychedelic neon marries science. Plasma artists Wayne Strattman and Mundy Hepburn display pieces created by gas ionizing inside glass vessels shaped as skulls, frogs, trees, and more, resulting in dynamic, kinetic colors!

One of the really fun events put on by MONA is the neon cruise series. Viewers are escorted on a local bus tour to famous and lesser-known pieces of neon signage around Los Angeles and nearby environs.   http://bit.ly/2rNikhZ 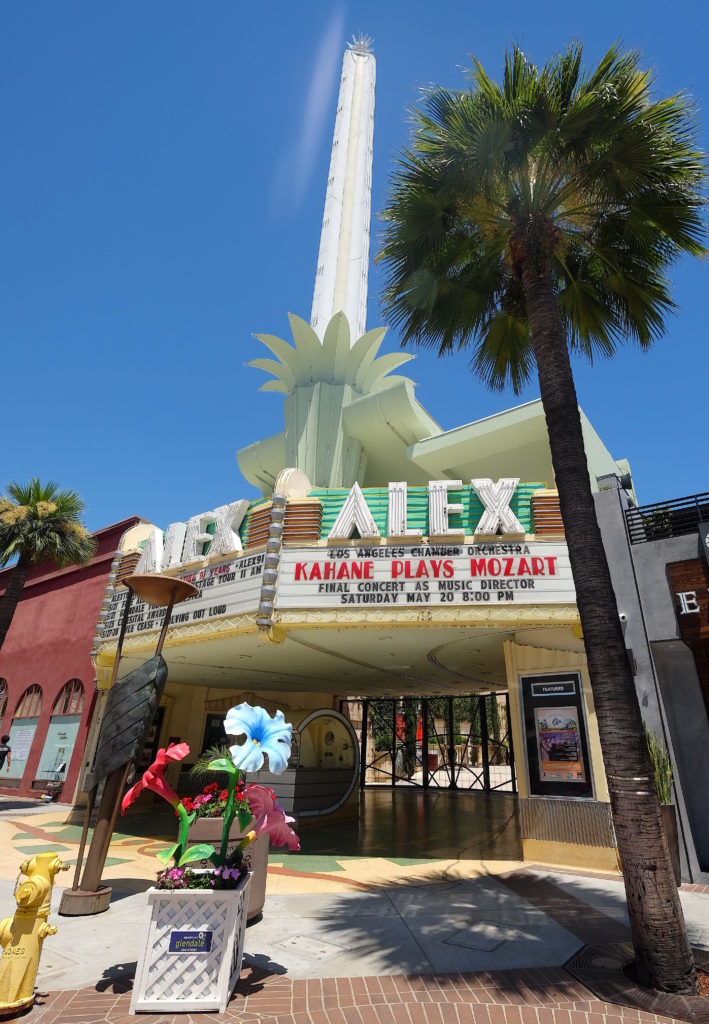 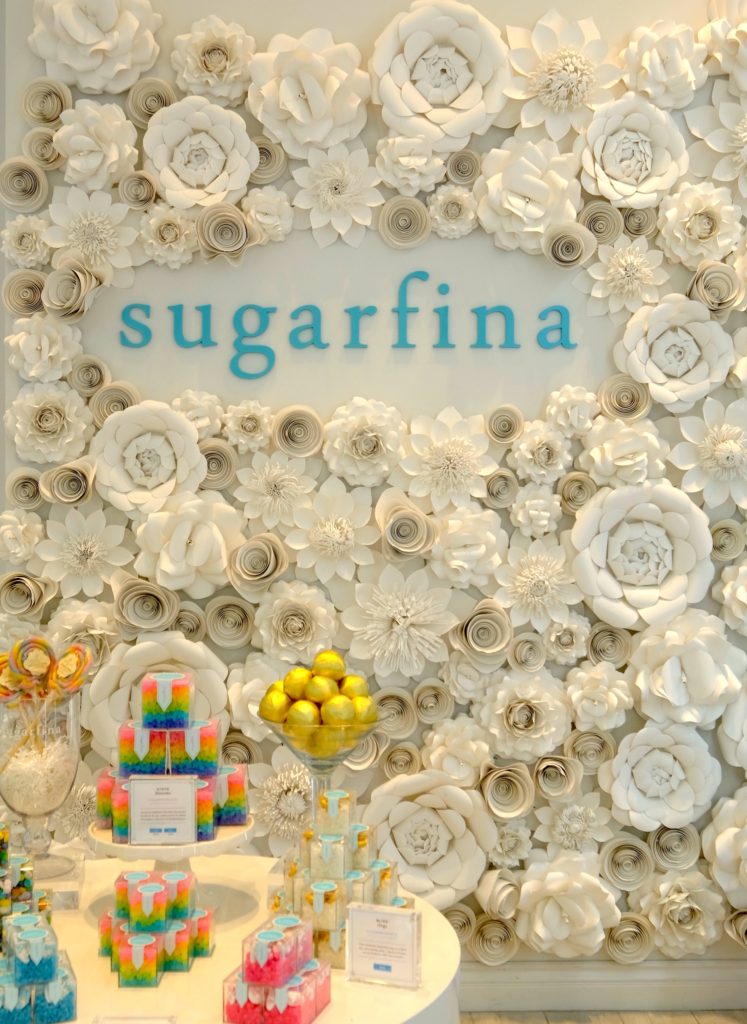 Sugarfina: (1.1 miles) You feel so cool just being in this tres fabu luxury candy boutique for grown-ups! It’s a white room filled with brightly colored confections packaged meticulously in clear plastic containers. These can be mixed and matched into Japanese style bento boxes for gifts. The German imported grapefruit pink flamingo gummies are almost too cute to eat. Caramels covered in peanut butter and dipped in strawberry white chocolate put a new twist on childhood PB&J. Watching your weight? The green juice 7-day gummy bear cleanse contain 20 % of your daily vitamins C & A.

One of the most popular treats are the champagne bears made with vintage Dom Pérignon Champagne in flavors of classic Brut and fashionable Rose. Super luxe are the 24K gold version for $150.   http://bit.ly/2qPfI6a 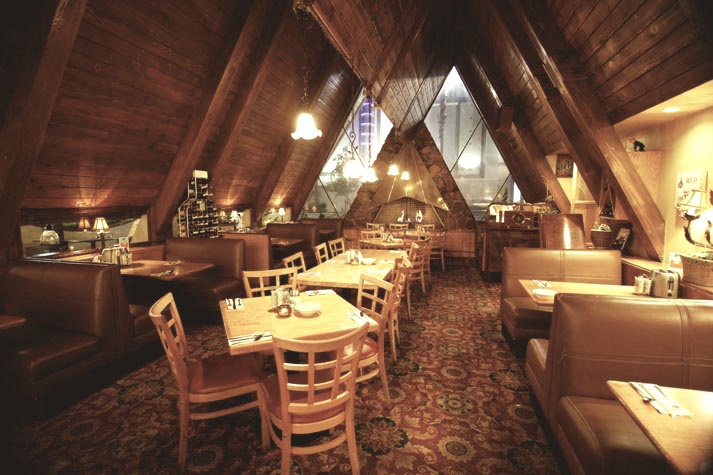 Foxy’s Restaurant: (1.6 miles) Brekkie at Foxy’s is a must! Fifty-two years in the business has made them masters of the griddle. Huge plates with hash browns and house specialities are what peeps line up to eat. Try the Leaning Tower of Mexico  — three corn tortillas layered with Spanish rice, black beans and two eggs smothered in ranchero sauce, cheese and avocado. Have a sweet tooth? Their Cinnamon Roll French Toast will lure you through the doors.   http://bit.ly/2rEiyvz 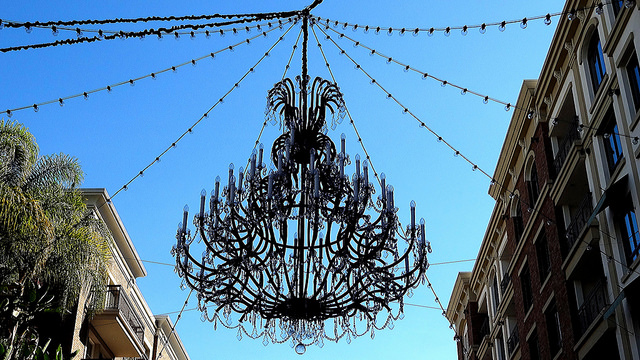 The Americana at Brand Mall: (1.1 miles) The first thing to catch your eye at this out door shopping emporium is the 600 pound Grand Chandelier suspended above the valet parking area. It measures 12 feet high by 10 feet in diameter, with 55 lights and 1,200 etched, flat pendalogue and almond drop crystals from the Czech Republic. This is a precursor of the gorgeous shops in the mall. Millennials flock to Kaitlyn Clothing for flowy floral rompers and dresses; new Moms love Disney Baby, the only Disney store in the world offering items for just little, little ones; stylish women purchase pieces off the racks at Diane von Furstenberg, while men peruse The Art of Shaving for grooming products. An open-style, electric-powered trolley offers complimentary rides around the property, past the animated fountain whose water spouts dance to tunes.    http://bit.ly/2qh3KmR 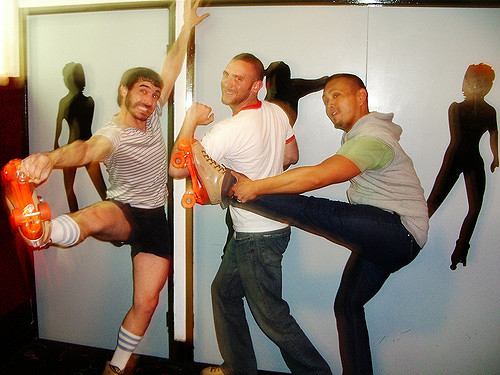 Moonlight Rollerway Skating Rink: (2.0 miles) Dominic Cangelosi became an employee here in the late 1960’s and never left. He’s transformed the Glendale place into a whirl-a-rama with special nightly events. Wednesday’s Rainbow Skate gives the LGBTQ community an alternative to the bar scene. Throwback Thursday plays tunes from the 70’s, 80’s, and 90’s. A real treat is on Tuesday’s from 8:30 p.m. to 10 p.m. when Cangelosi plays the organ as guests whirl around the maple wood tongue and grove rink. Multiple TV shows, movies, and music videos have been filmed here. Studios continue to use Moonlight because it embodies good, clean fun.   http://bit.ly/2s0CkOi 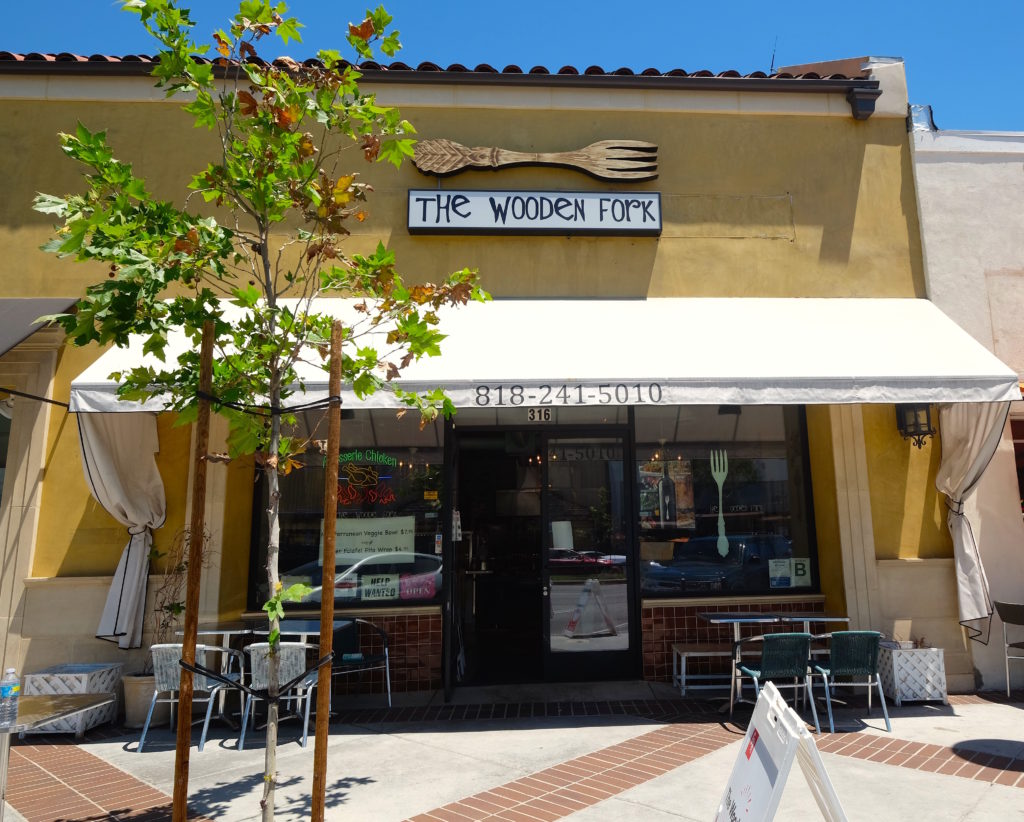 The Wooden Fork Cafe & Bakery: (1.0 mile) The name and look of this sweet cafe caught my eye when walking down Brand Boulevard. Inside, chalk boards have daily specials which offer something for everyone — coconut curry bowl, rotisserie chicken, cali wrap, and spaghetti with meatballs. The two page menu is full of breakfast, lunch, dinner deliciousness, and the staff is super friendly!   http://bit.ly/2qUtCn5 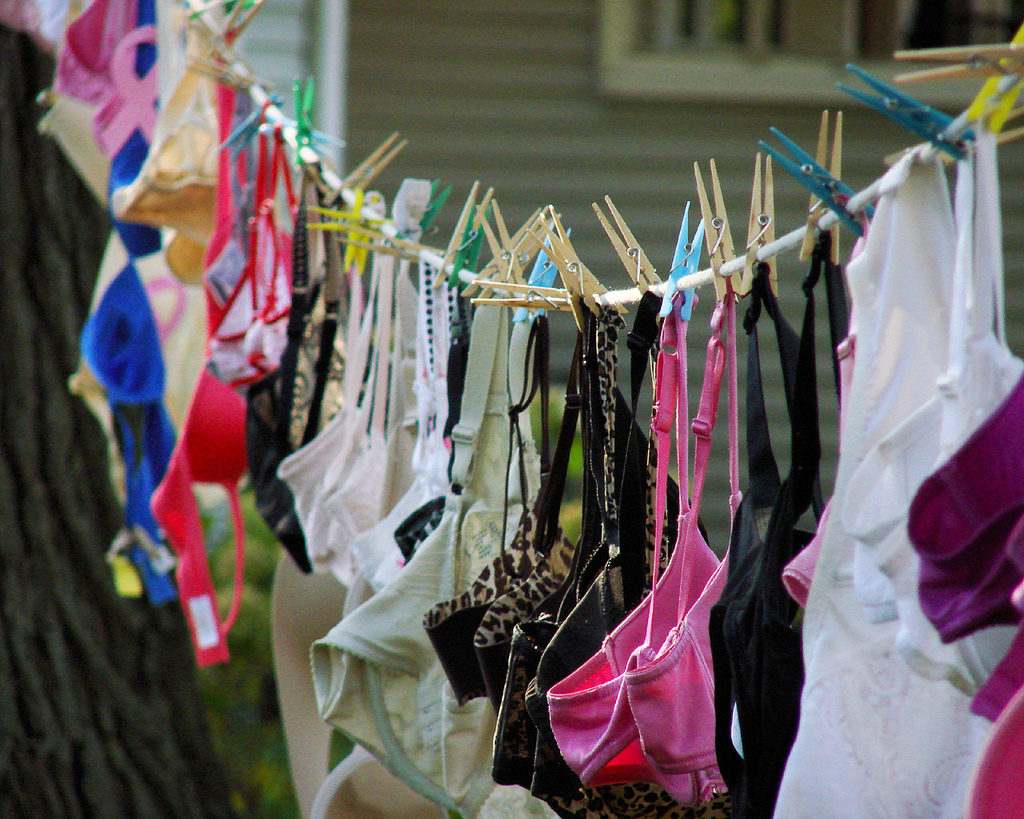 Laura’s Corset Shoppe: (1.2 miles) This is the oldest business in Glendale. Laura knew the secret long before Victoria. Give women good customer service, know your product, and sell everything from dowdy to daring. Two sisters, one named Laura, opened the shop in 1922. Today, Haley Trivoli is at the helm. Her sweet demeanor makes visitors feel more like a friend than customer. She sells corsets to younger girls who wear them as shirts under their jacket. Men also stop in to purchase Fantasie lace garter belts and matching stockings for their sweethearts. A large part of Trivoli’s business is fitting bras and prostheses for former breast cancer patients. She says women, no matter how old or their circumstances, want to look sexy.   http://bit.ly/2r1m0NZ 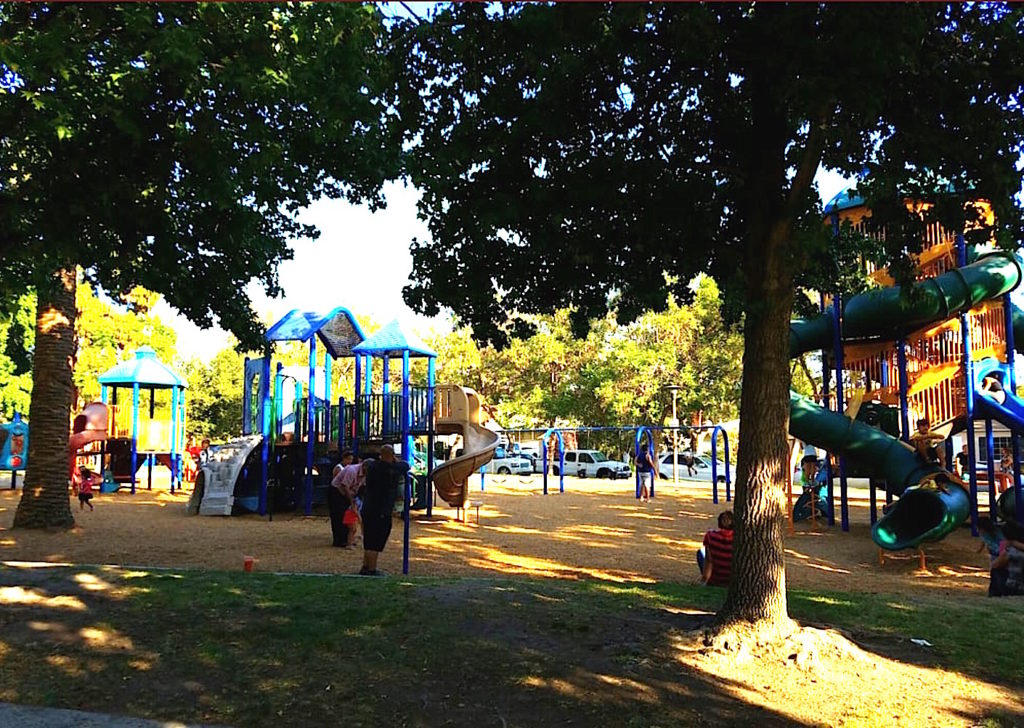 Fremont Park: (1.0 mile) We all love green space when in a city full of sky-scrapers. For those traveling with kids, this is the perfect place for them to expend some energy. There’s an awesome play structure with four slides, jungle gyms and a mini rock-wall to climb. Public bathrooms are available. Families bring picnics to eat at the nearby tables or lawn. There’s a small kiddie pool, but no lifeguard. If tennis is your racquet, rent one of the numerous courts with reasonable prices. (No webiste)

Eggslut: (1.2 miles) If the name isn’t reason enough to try this very popular place, then its Bon Appétit award as one of the top 10 new U.S. restaurant’s in 2014 may do the trick.  Eggslut refers to someone who loves the sunny centered gems so much they’ll eat them morning, noon, and night in any form with any other food. It’s namesake dish is a coddled egg on pureed potatoes, topped with gray salt and chives, served in a jar with a toasty crostini. Few, if any, restaurants have you asking the server for a “slut.” The lunch menu pairs the cage-free ovums with their burgers, or tri-tip, and an array of salads.   http://bit.ly/2r2GyI4